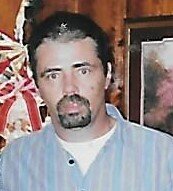 Please share a memory of Robert to include in a keepsake book for family and friends.
View Tribute Book
Robert Lloyd Fox of Amherstdale, WV Robert Lloyd Fox, 57, of Amherstdale, went to be with the Lord on Sunday, December 5, 2021, leaving from Logan Regional Medical Center at Logan, after a long illness. He was born on December 16, 1964, at Logan, the son of the late James Howard and Tressie (Nelson) Fox. In addition to his parents, he was preceded in death by two sisters, Frances Music and Sally Jude; four brothers, Joe Fox, James Fox and his wife Hattie, Billy Fox and his wife Diane, and Jeff Fox and his wife Brenda; two nieces, Tressie Fox and Tabitha “Tabby” Fox and her daughter. Robert was a 1982 graduate of Man High School. He worked as a carpenter when he was able. Before Rob got saved he enjoyed fighting chickens, shooting pool, and playing poker machines. After God saved him he enjoyed going to church, singing in church, and reading his Bible. He was saved at Crown Holiness Church when he was 45 years old and was thankful for his salvation. Those left to cherish his memory are the love of his life for 35 years his wife, Cathy Jo (Hinkle) Fox; four children, Robert Lloyd Fox, Jr. and his wife Alara of KY, Billy Joe Fox of Kistler, Jason Hinkle and Courtney Hinkle, both of Lyburn; three grandchildren, Hailey Fox, Madyson Fox, and Scarlett Fox; five sisters, Lou Russell of Welch, Mae Massey and her husband Larry of Oceana, Rosemary Lamb and her husband Roy of County Line, Ruby Fox of KY, and Eileen Hoosier and her husband Leonard of Greenvalley; and many nieces and nephews along with a host of other relatives and friends. Visitation will be held from 11:00 a.m. until 1:00 p.m. on Friday, December 10, 2021 at the Krantz-McNeely Funeral Home at Man. Funeral services will begin at 1:00 p.m. Friday, December 10, 2021, at the Krantz-McNeely Funeral Home with Rev. Charles Vance officiating. Burial will follow in Cook Cemetery at Lynco. Online condolences may be sent to www.krantzmcneelyfuneralhome.com Arrangements have been entrusted to the care of the Krantz-McNeely Funeral Home at Man.
To plant a beautiful memorial tree in memory of Robert Fox, please visit our Tree Store
Friday
10
December

Share Your Memory of
Robert
Upload Your Memory View All Memories
Be the first to upload a memory!
Share A Memory
Plant a Tree