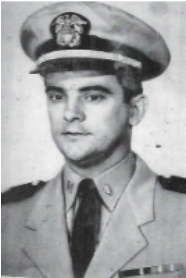 James O. Bryan, LCDR USN Retired Of Charles Town, WV James O. Bryan, LCDR USN Retired, of Charles Town, departed this life on Wednesday, May 5, 2021 from his home following an extended illness. He was born April 28, 1929 in Grundy, VA, the only son of the late James Frank and Elizabeth Mullins Bryan of Sarah Ann. In addition to his parents, he was preceded in death by his sisters, Marcella (Tom) Farley and Norma Zornes, a beloved niece, Brenda Holland, and a beloved nephew, Thomas Bryan Farley. James was graduated from Gilbert High School and enlisted in the U.S. Navy in 1947. His Naval career spanned 22 years of service, having retired from the Oceana Naval Air Station in Norfolk, VA in 1969. During his tour of naval duty, he served as laboratory technician at the U.S. Naval Hospital at Great Lakes, IL, served on the USS Wisconsin battle ship, the USS Macon heavy carrier, the USS Oriskiny, served with the US Marines and spent two years in Medical Research at the Submarine Base in New London, CT and one year in Adak, AK. He served as Chief Executive Officer of Jefferson Memorial Hospital (currently known as WVU Hospital East) and Shenandoah Home, Inc., from 1977-1992, at which time he retired. During his tenure at JMH, a third floor was added to the hospital, providing additional patient space as well as other areas of new and expanded healthcare services. In July 1985, he was advanced from member to Fellowship status in the American College of Healthcare Executives, an award given only to those persons displaying the highest level of professional achievement. He was on of only 114 hospital executives among healthcare executives in the US and Canada and US Territories to receive this high honor and was one of only two from WV. James was active in professional, community and civic affairs, being a member of the Jefferson County Chamber of Commerce, member and past president of the Kivanis Shenandoah Breakfast Club, a member of the Charles Town Chapter 948 Loyal Order of the Moose, member and officeholder of the Charles Town Lions Club. He served on the Board of Trustees of the West Virginia Hospital Association from 1980-84 and Vice Chairman of the Northern District of the West Virginia Hospital Association. He received a business administration degree from George Washington University and a master’s of science degree in hospital and healthcare services administration from the Ohio State University. Those left to cherish his memory are his wife of 42 years, Janice Standifur Bryan of Charles Town; three sons, Mark (Sharon) of Arcadia, CA, Jon Kempton of Los Angeles, CA, and James (Kim) Jr. of Charles Town; one daughter, Paula Vladimery of Wilson, NC; nine grandchildren: April Harper of Brenton, Mathew Vladimery of London, England, Mandy Davis of Wilmington, NC, Sarah Vladimery of Los Angeles, CA, Emmilee Bryan of Fort Loudan, PA, Scott Graham of Oklahoma City, OK, Jon K. Bryan, Jr. of Dallas, TX, Brandi Eckols of Dallas, TX, and Dakota Bryan of Los Angeles, CA. Beloved nieces and nephews: Sandra Smith of Mechanicsville, VA, Kim Meade of Summersville, Karen McGuire of Omar, and Gale (“Duke”) Thompson of Chapmanville and beloved nephews, David Zornes of VA and Bryan Farley of Plant City, FL. In accordance with his wishes and COVID-19 restrictions, Graveside Services with Military Honors will be conducted at 1:00 p.m. Monday, May 10, 2021, at the Highland Memory Gardens at Godby, WV Pallbearers: David Zornes, Scott Davis, Kenneth Meade, Charles Smith, and Kevin Standifur. Online condolences may be sent to www.krantzmcneelyfuneralhome.com Arrangements have been entrusted to the care of the Krantz-McNeely Funeral Home at Man.
To plant a beautiful memorial tree in memory of James Bryan, Sr., LCDR USN Retired, please visit our Tree Store
Monday
10
May

Military graveside rites will be observed.

Governor Jim Justice of West Virginia has mandated that masks be worn inside of all public buildings,churches, and businesses. Please bring your mask. Thank you

Share Your Memory of
James
Upload Your Memory View All Memories
Be the first to upload a memory!
Share A Memory
Plant a Tree