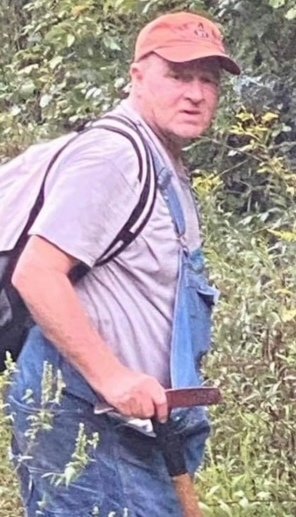 Michael Glen Adkins of Greenvalley, WV Michael Glen "Mike" Adkins, 57, of Greenvalley, departed this life on Saturday, April 3, 2021, at Greenvalley, after a brief illness. He was born on March 28, 1964, at Logan, the son of Eloise Canterbury Fenner and the late Benjamin Lewis Adkins. In addition to his father, he was preceded in death by two brothers, Benji Adkins and Eddie Adkins; grandparents, Edward and Melva Canterbury and Frank and Gladys Adkins; and his step-father, Chester Fenner, Jr. Michael was a disabled coal miner. He enjoyed the outdoors and loved to ginseng, hunt, and fish. Mike was a Nascar fan. Those left to cherish his memory are his mother, Eloise Fenner with whom he made his home; one daughter, Amber Adkins of Greenvalley; two sons, Michael Glen Adkins II and his wife Jessica of Delbarton and Michael Lingerfelt of Oceana; four grandchildren, Zackery Adkins, Bryson Lawrence, Zayden Adkins, and Angela Adkins; one brother, Brian Adkins and his fiancé Melissa Ball of Greenvalley; his girlfriend, Tanecia Osborne of Oceana; and several nieces and nephews along with a host of other relatives and friends. Visitation will be held one hour prior to services. Funeral services will be held at 1:00 p.m. Thursday, April 8, 2021, at the Krantz-McNeely Funeral Home at Man with Brother Sheldon Wells officiating. Burial will follow in Forest Lawn Cemetery at Pecks Mill. Pallbearers will be family and friends. Online condolences may be sent to www.krantzmcneelyfuneralhome.com Arrangements have been entrusted to the care of the Krantz-McNeely Funeral Home at Man.
To plant a beautiful memorial tree in memory of Michael Adkins, please visit our Tree Store
Thursday
8
April

The President of the United States has asked and the Governor of the State of West Virginia has mandated that masks be worn inside of all public buildings, businesses, and churches. Please bring your mask.