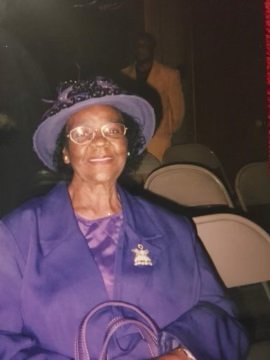 Lenora Deretha Moss Formerly of Mallory, WV On February 12th, 2021 our Heavenly Father was standing at the gates of Heaven to welcome one of the most beautiful angels to His army. Born in McDowell County, West Virginia, Lenora Deretha Moss was an amazing woman of God and beloved mother. She was a devout Christian all of her life and a founding member of Pilgram Rest Baptist Church in Mallory, WV. She later became a long standing member of Campus Church of God in Cyclone, WV. Lenora knew the love of our Lord and Savior and would always talk about Him when she could. In 1946, she met her husband of 45 years, Robert Henry Moss Sr. while he was in the Army. They married and settled down in Mallory, WV. From that union of love, nine children were born. Lenora enjoyed a full and wonderful life abundant in all things. She was always ready to travel as long as it was not by plane or boat. She enjoyed many memorable trips with her children over the years. Lenora adored her hometown of Man, WV and made sure to make her mark wherever she could. She enjoyed coaching cheer-leading, time with the Girl Scouts, Troop #2106 in particular and was also a member of the Order of Eastern Star, Starlight Chapter 40 where she served as secretary and treasurer. One organization that was near and dear to her heart was the Red Hat Society. She and that group of ladies could be seen everywhere in their purple clothes, red hats, and of course, the fabled "Red Hat" pin. From being in the home-coming parades, to raising money for the Salvation Army in front of Pic-Pac, Lenora was always proud to be a "Red Hat." For almost two decades, she was a pillar among the educational community. Beginning in 1995, she touched the lives of many students and teachers while walking the halls of Mallory Head Start, Mallory Grade school, Christian Grade School, Old Man Jr. High School, Man K-8, and last but certainly not least, Man Senior High School. A Hillbilly at heart, Lenora could always be seen on Friday nights at the football field tearing tickets in the booth while laughing and making people smile as they came in. She truly was a wonderful lady and if you knew Lenora, you knew true friendship. She will be dearly missed and remembered by many people. She was preceded in death by her Husband, Robert Henry Moss Sr. and her oldest son, Robert Henry Moss Jr. Lenora is survived by sons, Mark (Melissa) Moss of Charleston, WV, Pierre (Cindy) Moss of Charleston, WV, Orlando (Lannie) Moss of Roanoke, VA, Derrick Moss of Roanoke, VA, Tony Moss of Columbus, OH, and Tim Moss of Charlotte, NC; daughters Orlanna (Willie) Stratford of Charlotte, NC, Tammy (Wayne) Johnson of Charlotte, NC, and adopted grand-daughter Aleigha Moss (Nick Page) of Charlotte, NC; Sisters, Virginia Starghill of Logan, WV and Florene Perkins of Youngstown, OH; 16 grandchildren; 22 great-grand children and 1 future great-grandchild on the way; 1 great great-grandchild and a host of nieces and nephews. Funeral services will be held at 1 p.m. on Saturday, February 20, 2021, at Krantz-McNeely Funeral Home Chapel with Rev. Lawyer Westbrook III officiating. Burial will follow at Highland Memory Gardens at Godby. Pall bearers will her sons and grandsons. Arrangements have been entrusted to the care of the Krantz-McNeely Funeral Home at Man. God grant me the SERENITY to accept the things I cannot change, the COURAGE to change the things I can and the WISDOM to know the difference. The Family
To plant a beautiful memorial tree in memory of Lenora Moss, please visit our Tree Store
Saturday
20
February

The President of the United States asks that we wear masks in all buildings. The Governor of the State of WV has mandated that masks be worn inside of all buildings Please bring your mask. Thank you

Share Your Memory of
Lenora
Upload Your Memory View All Memories
Be the first to upload a memory!
Share A Memory
Plant a Tree