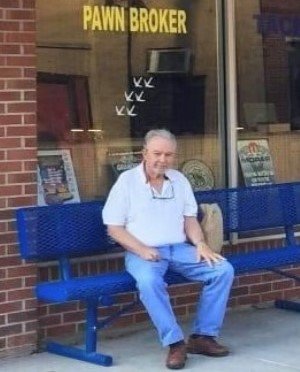 Roger D. Muncy Of Man, WV Roger Dale Muncy, 68, of Man, went to be with the Lord on Sunday, December 27, 2020, leaving from Logan Regional Medical Center, after a long illness. He was born on November 1, 1952, at Omar, the son of the late Jackson Bailey Muncy and the late Dorothy Farley Muncy. In addition to his parents, he was preceded in death by his daughter, Sonja Dale Holstein; granddaughter, Jody Nicole Martin; one brother, Donald Muncy; and his parents-in-law, Wetzel and Fannie Kitchen. Roger was the owner and operator of Sporting Goods/Pawn Shops throughout southern WV. He was a longtime member of the Board of Directors at the Bank of Mingo. Roger served as a Towne of Man Councilman for 35 years. A very civic minded man, Roger was responsive to the needs of the Man community as well as many of the surrounding cities and towns. He was a Mason and Jester of the Aracoma Lodge #99 at Logan and the Beni Kedem Shrine Temple at Charleston. Roger will long be remembered for his remarkable ability to work with others to get things done. Those left to cherish his memory are his wife, Dorothy Louise Muncy of Man; three sons, Bobby Bruce Johnson of Huntington, Roger Dale Bailey Muncy and his wife Angela of Man, and Michael Dale Muncy of Charleston; one daughter, Jennifer Robertson and her husband Stephen of Cross Lanes; six grandchildren, Amanda Dale Holstein, Rachel Nicole Martin, Jenna Newton, Brock David Muncy, Baylee Danielle Muncy, and Peyton Elizabeth Muncy; two great-grandchildren, Keon Gauldman and Kaylee Hayes; and several nieces and nephews along with a host of friends. Visitation will be held from 11:00 a.m. until 1:00 p.m. Funeral services will begin at 1:00 p.m. Sunday, January 3, 2020, at the Mallory Church of God at Mallory with Rev. Ollie Parsons officiating. Burial will follow in Forest Lawn Cemetery where Masonic graveside rites will be observed. Pall bearers will be the employees of US Loans, Inc. Online condolences may be sent to www.krantzmcneelyfuneralhome.com Arrangements have been entrusted to the care of the Krantz-McNeely Funeral Home at Man.
To plant a tree in memory of Roger Muncy, please visit Tribute Store
Sunday
3
January

Masonic Graveside Rites will be conducted by the Aracoma Lodge Number 99 of Logan.

The State of West Virginia has mandated that masks be worn inside of all businesses, churches, and public buildings. Please bring your mask. Thank you

Share Your Memory of
Roger
Upload Your Memory View All Memories
Be the first to upload a memory!
Share A Memory
Plant a Tree