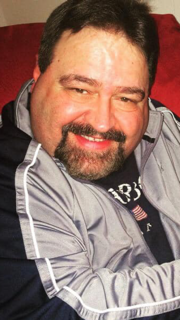 Brian Keith Blankenship, 54, of Man passed away on Sunday, October 6, 2019 at his residence.

Born on May 12, 1965 in , Brian was the son of Shirley Blankenship of Amherstdale and the late Roy Blankenship.

Brian was a 1983 graduate of where he played football and baseball.

He worked various jobs, including as a cook at Druther’s, a dispatcher in the mines, and a route salesman for Coca-Cola, before he attended Charleston School of Beauty Culture where he learned his true calling. Brian became a master at cutting hair and since the 1990’s has been known as the “Hillbilly Barber” in  Brian had many clients that not only admired his fresh cuts and styles, but had several “regulars” who came to the barber shop daily just to hear his wildly entertaining stories and hilarious jokes.  Brian will always be remembered for having a kind soul and vivacious personality.

Following his grandfather’s passion, as a child Brian became a devoted fisherman and hunter. He was an avid sports fan his entire life and dearly loved the Man Hillbillies, Cincinnati Reds, and Detroit Lions.  Every spring, he became elated about March Madness and often times created brackets for competition. Brian also coached many area youth in T-ball. Another of his favorite pastimes was engaging in Texas Hold’em Tournaments with his friends. All who think of Brian in the future will forever have wonderful memories and stories to tell.

Visitation will be held from 11 a.m. until 1 p.m. Saturday at Krantz McNeely Funeral Home at

Funeral services will begin at 1 p.m. on Saturday, October 12, 2019, at the funeral home with the Rev. Van Collins officiating.

Brian will lovingly be laid to rest close to his father at  at Godby.

The little ole’ will never be the same and Brian will be so terribly missed.

Share Your Memory of
Brian
Upload Your Memory View All Memories
Be the first to upload a memory!
Share A Memory
Plant a Tree