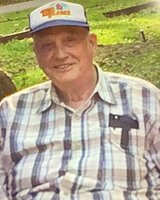 Joseph Euell Cline, Sr. of Cooks Addition, WV Joseph E. Cline, Sr., 91, of Cooks Addition, went to be with the Lord on Thursday, March 3, 2022, after a short illness. He was born on May 30, 1930, at Landville, the son of the late Thomas Burgess and Hattie (Blankenship) Cline. In addition to his parents, he was preceded in death by the love of his life of 53 years, Loraine Ann (Toler) Cline; one infant grandson, Joshua D. Roberts; one infant brother, Johnny Cline; two infant sisters, Truby and Macie Cline; four brothers, Dennie Cline, Rev. Densil Cline, Leonard Cline, and Duard A. Cline; two sisters, Icy Cline and Vernice Lester; one brother-in-law, Shellah Lester; and three sisters-in-law, Vicie, Trubie, and Thelma Cline. Joe was a disabled coal miner and a member of the UMWA. He was a born again Christian and a Deacon at Greenville Freewill Baptist Church. Joe was a veteran of the U.S. Army. He enjoyed sitting on his porch chewing tobacco. Those left to cherish his memory are his daughters, Teresa (Sherman) Scites of New Tazewell, TN, Debi Williams, and Vivian (Ricky) Roberts, all of Mallory; two sons, Barry Cline of Mallory and Joseph (Ruth) Cline, Jr. of Cyclone; three grandsons, Jason (Natalie) Scites of Van Buren, AR and Barry “BJ” Cline and Joseph “Joey” Williams, both of Mallory; one granddaughter, Lora (Matt) Sanders of Accoville; four great-grandchildren, Jason, Jr., Alexander “Alex”, Henry, and Olivia Scites, all of Van Buren, AR; and a faithful pet bird named Pretty Boy; and numerous nieces and nephews along with a host of other relatives, church family, and friends. Visitation will be held from 6-9 p.m. Wednesday at the Krantz-McNeely Funeral Home at Man and one hour prior to services on Thursday. Funeral services will begin at 1:00 p.m. Thursday, March 10, 2022, at the Krantz-McNeely Funeral Home at Man with Rev. Baxter Toler officiating. Military honors will be conducted by the Wyoming County Veterans Honor Guard. Burial will follow in Highland Memory Gardens at Godby. Pallbearers will be sons, sons-in-law, and grandsons. Online condolences may be sent to www.krantzmcneelyfuneralhome.com Arrangements have been entrusted to the care of the Krantz-McNeely Funeral Home at Man.