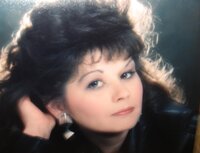 Linda Kay Johnson of Landville, WV Linda Kay Johnson, 56, of Landville, departed this life on Sunday, October 24, 2021, at Logan Regional Medical Center, after a long illness. She was born on September 19, 1965, at Man, the daughter of Janice (Parsons) Ellis of Landville and the late Donnie Ellis. In addition to her father, she was preceded in death by one grandson, Gabriel Caleb Johnson; one nephew, Ray Sanders; her paternal grandparents, Dennis and Iva Ellis; and her maternal grandparents, Paul and Myrtle Parsons. Those left to cherish her memory and mourn her passing are her two sons, Victor Steven Johnson II and his wife Crystal of Man and Justin Johnson of Landville; one grandson, Victor Steven “TRE” Johnson III; her puppy dog, Wookie; her mother, Janice Ellis of Landville; one brother, Eugene Ellis of Landville; three sisters, Ruth Ellis, Jennifer and Kenny Toler, all of Landville, and Barbie and Mike Chapman of Davin; four nephews, Donnie Ellis, Todd and Cort Sanders, Brandon and Ladonna Ellis, and Nick and Crissy Weber; one niece, Brittany and Martin Morgan; five great-nephews, Hunter and Devon Sanders, Ethan Ellis, Hunter Gerace (Ellis), Konnor Pritchard (Weber); two great-nieces, Haylee Ellis and Jupiter Morgan; along with a host of other relatives and friends. In honor of Kay Kay’s request her remains have been cremated and a memorial service will be held at a later date. Online condolences may be sent to www.krantzmcneelyfuneralhome.com Arrangements have been entrusted to the care of the Krantz-McNeely Funeral Home at Man.