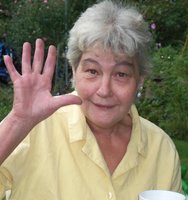 Regenia Ann “Jean” Osborne of Davin, WV Regenia Ann “Jean” Osborne, 64, of Davin, went to be with her Jesus on August 3, 2021, after a long illness. She was born on February 2, 1957, in Gilmer County, the daughter of the late William “Buck” and Gracie Jane (Gibson) Elswick. In addition to her parents, she was preceded in death by three sisters, Armenta Jane Elswick, Joyce Marie Elswick, and Shirlda Gibson; and two brothers, McKinley Elswick and Roger “Buck” Elswick. Jean loved going to church and being with her family and friends. In her spare time, she loved to color and watch her favorite show Gunsmoke. Those left to cherish her memory are her husband of 46 years, Donald Ray Osborne; her children, Chester “Kunfue” Ray Osborne and his girlfriend Sue Hatfield of Man, Joyce Marie Toth and her husband Jason Toth of Davin, and Jeremiah Osborne and his wife Michele Osborne of South Man; six grandchildren that she loved dearly, Joseph Toth, Morgan Toth, Charity Toth, John Ryan Osborne, Rylee Cole Osborne, and Isabella Rose Toth; one great-granddaughter, Josie Wade; her brothers and sisters, Raymond Elswick and his wife Roberta of West Hamlin, Violet Elswick of Lorado, Velma Gibson and her husband Roger of Lorado, Cathie Lusk and her husband David of Branchland, Willie Elswick and his girlfriend Crystal of Chapmanville, and Larry “Wimpy” Elswick and his wife Amy of TN; and many nieces and nephews along with a host of other relatives and friends. Visitation will be held from 6-9 p.m. Saturday, at the Graceway Church at Lorado. Funeral services will begin at 1:00 p.m. Sunday, August 8, 2021, at the Graceway Church at Lorado with Rev. Chester Osborne, Jr. officiating. Burial will follow in Toler Cemetery at Toney Fork. Pallbearers will be Matthew Gibson, Kenny Maynard, Josh Kerr, Nathan Prichard, David Lusk, Joe Toth, and Roger Gibson. Honorary pallbearers are Billy Johnson, Ethan Gibson, and Jason Toth. Online condolences may be sent to krantzmcneelyfuneralhome.com Arrangements have been entrusted to the care of the Krantz-McNeely Funeral Home at Man.