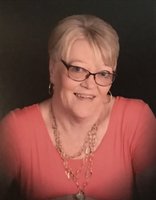 Marsha Gail Thompson of Cyclone, WV Marsha Gail Matson Thompson, 65, of Cyclone, went home to be with her Lord and Savior Jesus Christ, leaving from CAMC-Memorial Hospice Center, after a short illness. She was born on December 20, 1955, at Logan, the daughter of the late Raymond and Lou Matson. Marsha was a 1974 graduate of Man High School where she was a member of the Man High School Marching Band. She was a member of the Claypool United Methodist Church where she had served as the President of the United Methodist Women and was a member of the choir. One of the highlights of her life was when she married her childhood sweetheart in 2008. Marsha enjoyed putting a Daily Devotion on facebook every day. She was a member of the Cyclone Volunteer Fire Department where she had passed Fire Fighter One and Fire Fighter Two and was awarded Fire Fighter of the Year in 2017. She enjoyed spending time with family and friends at Smith Mountain Lake. One of the joys of her life was spending time with her grandchildren. Those left to cherish her memory are the love of her life, her husband, Danny Thompson; one daughter, Ambria Gail “Bam” Carpenter and her husband Will of VA; step-children, David Thompson and Sarah Brown and her husband Ricky, all of Mallory; three sisters, Sandra Matson Martin and Pam Matson Brown and her husband Jim, all of Davin, and Alicia Matson Corns and her husband Don of Mooresville, NC; six grandchildren, Julianna “Jo”, Anson, and Alora Carpenter, Nathan and Abby Brown, and Seth Lusk; two sisters-in-law, Rose Thompson Johnson of Combs Addition and Debbie Plumley of Milton; and many nieces and nephews along with a host of other relatives, church family, and friends. Visitation will be held from 6-9 p.m. Sunday at the Claypool United Methodist Church at Davin. A celebration of Marsha’s life will begin at 11 a.m. Monday, April 5, 2021, at the Claypool United Methodist Church with Rev. Tim Shuff officiating. Following the services Marsha will be lovingly laid to rest in Highland Memory Gardens at Godby. Pallbearers will be William Carpenter, Timothy Martin, James Brown, David Trent, Dustin Brown, and Christopher Corns. In lieu of flowers the family requests donations be made to the American Cancer Society, P.O. Box 22478, Oklahoma City, OK 73123 or online donations at www.cancer.org or CAMC-Memorial Hospice Center, 3200 MacCorkle Ave. SE, Charleston, WV 25301. Online condolences may be sent to www.krantzmcneelyfuneralhome.com Arrangements have been entrusted to the care of the Krantz-McNeely Funeral Home at Man.